Why just have a drink – when you can have a story, too? That’s the premise behind the cruise ship bar menu that’s won out over competitors throughout the world of hospitality.
“Best Beverage Menu” was awarded to Holland America Line for its newest bar concept onboard its newest ship at the 2022 VIBE (that’s the Very Important Beverage Executives) conference.
That means this bar menu isn’t just the best at sea. The award is open to any venue in the entire beverage space, and Holland America Line went up against other bars in hospitality, including restaurant groups, hotel chains, casinos, and more for the honor.
The “Half Moon Bar” debuted on board Holland America Line’s new flagship, the Rotterdam, which launched in fall, 2021. 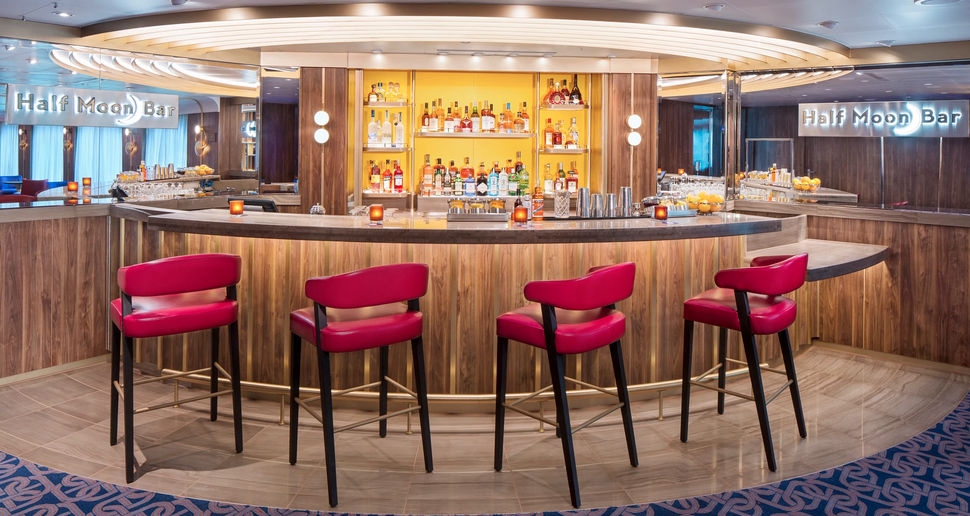 I traveled on the Rotterdam in the Caribbean in the fall, and can attest that the new bar concept is one of the great new innovations on Holland America Line’s latest ship. I’m not surprised that Half Moon Bar has – in just months – become “the most popular bar on board,” I’m told.
Half Moon Bar pays homage to Holland America Line in a couple of ways. It’s named after the cruise line’s private island in the Caribbean. And its bar menu tells the history of the line and cruising through the lens of its cocktails.
Each carefully crafted cocktail comes with its own fascinating tale, and simply reading the now award-winning bar menu transports you back in time on a journey though Holland America Line’s history. 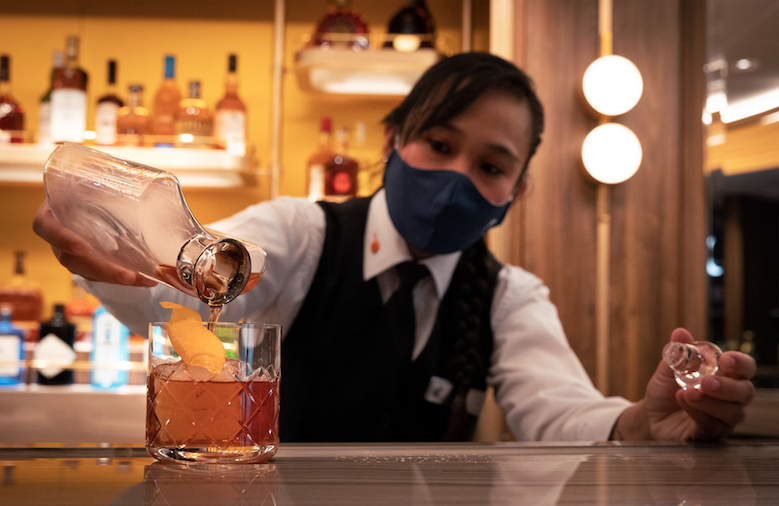 Time-traveling tipples on the menu include:
·      “The Original,” (pictured above) which celebrates Holland America Line’s first ship, Rotterdam I. It’s crafted from Dutch gin and a hint of single malt Scotch, ingredients inspired by the building of the ship and Holland America Line’s Dutch beginnings.
·      “De Halve Moon” ties into the line’s origins as ocean liner travel between Rotterdam and New York (which, you may recall, used to be Dutch and was called “Nieuw Amsterdam” before it was renamed New York City.) De Halve Moon is an ode to the Dutch sense of exploration and the botanical wonderland Henry Hudson found in present-day New York. It’s composed of Old Duff genever (the Dutch precursor to gin), lemon rosewater shrub and DDG Bitters.
·      “Three Mile Run” is a prohibition cocktail that tells the story of Holland America Line Prohibition-era ‘cruises to nowhere’ New Yorkers could take to get around no-alcohol rules. Once in open waters (three miles out), cocktail bars on the ship could be legally open, and quenching the thirst of New Yorkers for a strong one. It is made from a combination of lemon, honey and gin for a Bee’s Knees, whiskey for a Gold Rush or rum for a Honey Bee.
·      “May She Be Blessed” is an ode to the godmothers who bless the Holland America Line ships. The elegant and feminine cocktail is made with champagne and the guest’s choice of essence.
·      “Rotterdam VII” is dedicated to its namesake ship. The current Rotterdam is the seventh vessel to have that name in the nearly 150-year history of the line. Like the ship herself, the cocktail salutes both tradition and innovation, with its combination of smoked gin and maraschino.
If you’re imagining yourself on holiday, sipping an inventive cocktail with new and old friends and sharing a laugh and a good story, Half Moon Bar on Holland America Line’s new Rotterdam might be your best place to be. 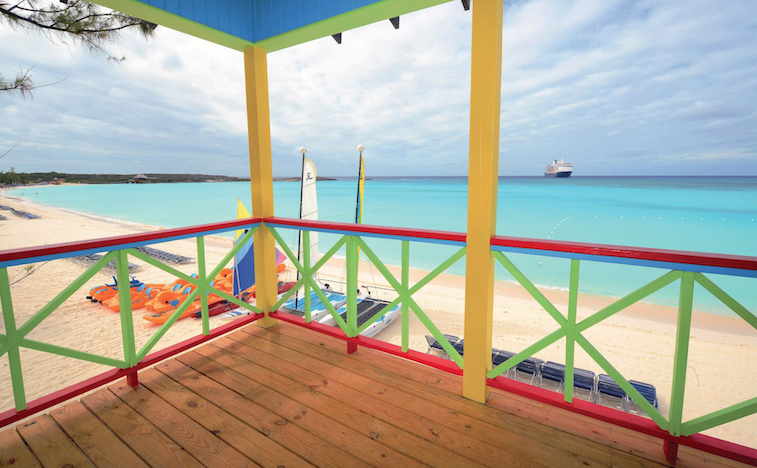 Book a Holland American Line cruise on the Rotterdam or any other ship in the Caribbean to visit the Half Moon Bar's namesake, Half Moon Cay (pictured above.) A day at Half Moon Cay - no matter what you're drinking - is the ultimate island beach day.

By: Lynn Elmhirst, TV show producer/ host and cruise expert
Images courtesy of Holland America Line
All rights reserved. You are welcome to share this material from this page, but it may not be published, broadcast, rewritten or redistributed.

The return of cruise travel has looked like a bit of a jigsaw puzzle. Piece by piece, cruise lines have worked o... learn more

Holland America Line Changes the Name of its Newbuild and Designates it the New FlagshipTravel has taken a beating by... learn more

In it for the Long Haul: Cruise Line Marks 147 Years of Sailing History

These historic photos and delightful vintage posters trace one of the longest journeys of any cruise line. Holland Am... learn more

Let Us Help You

Sign up for our newsletter to learn about the latest product news and deals. Also receive exclusive offers, contest details and giveaways.